When enabling optimization for encrypted MAPI on Windows 7 clients, you need to perform some additional configuration steps.

To get started with the process, follow the steps in the article Optimizing Encrypted MAPI Traffic. Beyond those basic steps, if you are optimizing MAPI clients on newer Windows versions, such as Windows 7, you need to use delegation mode. Delegation Mode enables optimization of encrypted MAPI RPC traffic by authenticating using Kerberos delegation architecture.

where delegate_user identifies the user account. This creates an extra tab on that user's account in Active Directory Users and Computers, named Delegation: 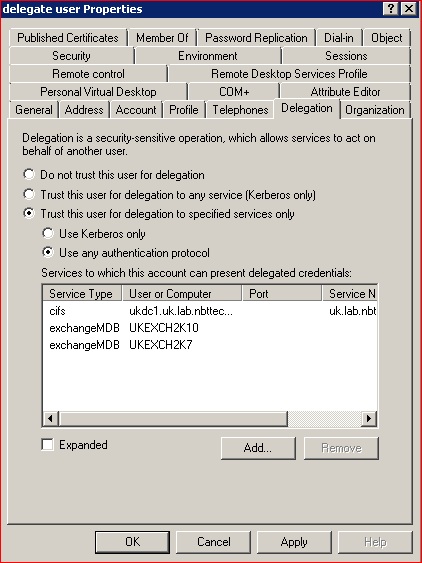 Scenario 1
You are already using Delegation mode for CIFS SMB signing and want to use the same account for Delegation mode while optimizing encrypted MAPI from Windows 7.
You can use the existing account. You do not need to run other Windows commands for this account. You do need to add the service type of exchangeMDB for the required MS Exchange server. To do this:

Scenario 2
You do not use Delegation mode or are using Transparent mode for CIFS Signing. Windows 7 encrypted MAPI needs to use Delegation mode. Install the Windows support tools to a domain controller. Once installed on the domain controller, from a Windows command prompt, run the setspn command against the Active Directory user designated for encrypted MAPI (in this example, delegate_user):

Note: The default install location for the Windows support tools is: c:\program files\support tools>. You can access a Windows command prompt from Start > Programs > Windows Support Tools menu to this location. From here, follow the last steps from scenario one, adding the service type of exchangeMDB for each MS Exchange server that will be accessed by a Windows 7 client.

Note: If you have multiple domain controllers, you will need to wait for the changes to propagate or you can force a syncronization.

From the server-side Steelhead, go to the MAPI page in the Steelhead web interface and specify delegation mode: 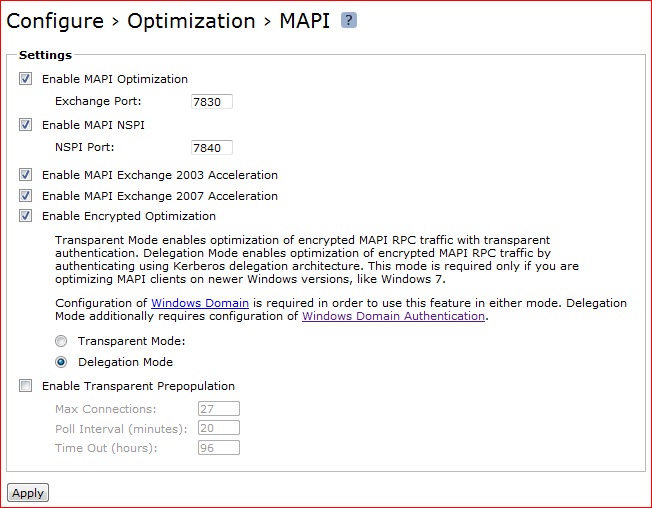 Add this account to the server-side Steelhead in the Windows Domain Auth page:

Add the specific MS Exchange servers to the appropriate fields under the Server Rules section. Save the policy and restart the service. Optimization for Windows 7 clients and encrypted MAPI is now enabled.

Additional Information
You can use separate accounts for CIFS SMB signing and Windows 7 Encrypted MAPI optimization. For an account to be used for SMB signing only, use the setspn syntax:

Specify the account and CIFS serves to use with this account on the Windows Domain Auth page in the Steelhead web interface. For an account to be used for Encrypted MAPI only, use the setspn syntax:
setspn -A exchangeMDB/delegate delegate_user

Specify the account and Exchange servers to use with this account on the Windows Domain Auth page in the Steelhead web interface.

Note: The differences between these accounts appears in Active Directory Users and Computers - Delegation tab.